MidOhioHydrographics Posts: 10,223Member, Moderator, Business Ninja El Moderator
January 21 in Equipment
As some of you already know, I am in the process of opening a new facility. I'm going to start this thread to (1) Give people an idea of what is needed for fairly large scale production including permitting and equipment and (2) gather ideas on part flow and equipment setup from some of the other professionals on here.

Original plan was to move my current operation there, but instead I am just going to keep both locations open. No sense in moving what works. We run good production out of here, we are just limited by space. Plan is to keep smaller production and custom work at the current shop (some of you have been here) and larger production in the new facility. Current shop is 60' x 60', 3600 sq ft. New facility is 86'x100', 8600 sq ft and wide open. Here's the new equipment layout plan that I drew in Google Sketch Up. Note: Offices up front will proably be redesigned. I would like the film room to be back more near the tank and will probably build it in attached to the compressor/utility room near the back. 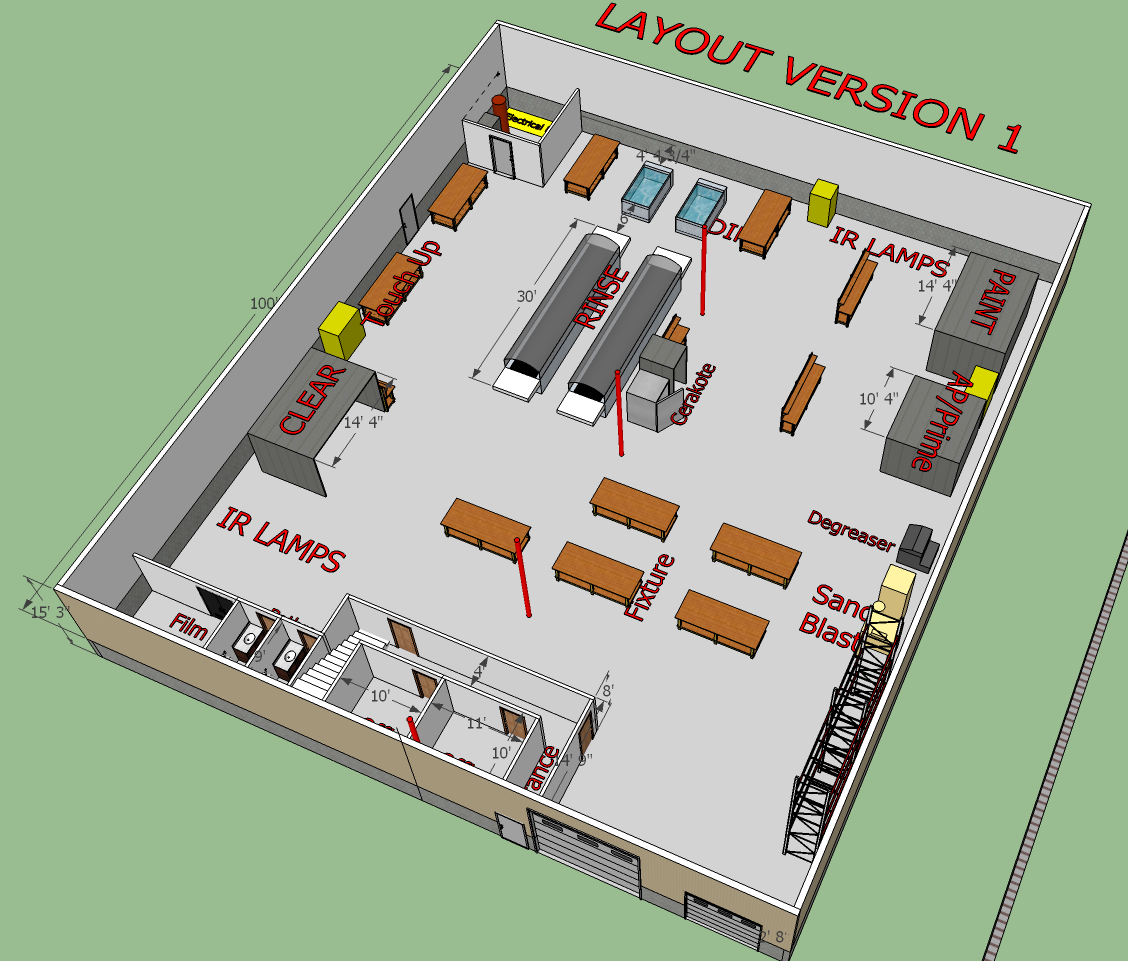 As you can see, plan is 3 booths, 2 tanks, 2 conveyors. The plan was to move my current equipment (one booth, one tank, one conveyor) over to the new shop, but that's not going to happen. Eventually if needed, I will just have room to expand there and order the extra booth, tank, and conveyor.

Some booth info.... As of now the Paint and Clear booths will be installed, with one Make Up Air unit. The two new booths are 14' wide, 7' tall, with 6' working depth. Identical to our current booth, but another 4ft wider to allow for more space for 2 people, and a 3rd if we get pushed. These had to be permitted by the Ohio EPA with what is called a Permit to Install and Operate. They take all our potential emissions (calculated from the volumes and SDS's I provided them) and let me know how and what I need to track. We need to show that we are using less than 10 gallons of coatings per day (including activator). We will need to track that daily to be compliant. I'm still working on various tracking methods (Scales, flow meters, a graduated stick) to see what would be most efficient. We shouldn't be close to 10 gal per day right now. Our current shop is tracked monthly. As we empty a container (1 gallon, or 5 gallon bucket) we just put a mark on a sheet, and tally it up at the end of the month, then add to my excel spreadsheet. Reports are due annually. Current shop allowance is 20.6 tons of VOC's per year, and I've never been over 2 tons, although this year will be quite a bit more.

Air System - Below is a quick video of the shop compressor and airline setup. Compressor was chosen because it's identical to the one I have in my current shop (20hp Atlas Copco rotary screw compressor pushing just over 90cfm). Airlines are RapidAir Fast Pipe, 2" overhead loop. At each connection there is a Tee wherever possible, with a 3/4" NPT outlet coming out the top. I did this so it's easier to add drops in the future wherever needed. From what I calculated, that 2" loop adds about 60 gallons of air storage. Tank is 240 gallons, so total storage is right around 300 gallons. Currently, I used 1" PEX to come out of the compressor and over to the air tank. I was instructed by the compressor tech that this is not the best idea. Pressure rating of PEX is affected by temperature, and the discharge temp of the air is going to be higher than I expected, and may contain some oil (which may react with the PEX?). So just to be save, I'm going to change this to 1" RapidAir Fast Pipe as well. All drops coming down from the loop will be 1" PEX. By that point the temperature and oil shouldn't be an issue. 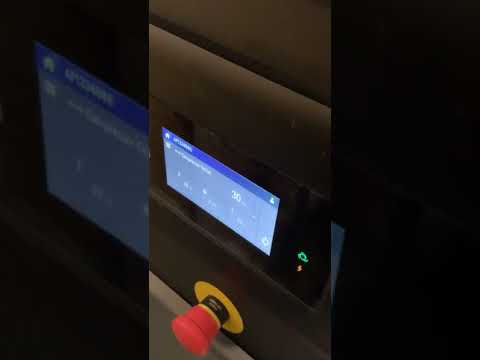 Drains - You'll see in the video that I had trench drains cut in. The one to the left will be behind the tanks so we can power wash the floor. It gets slick with all the residual PVA and water dripping off parts. The trench drain to the right of that will be in between the conveyors. you can see the white water lines coming up out of the floor to feed those. Will also have a large on-demand water heater back behind the tanks to allow me to fill with warm water, and also run a garden hose to spray off parts with warm water before and after the conveyor as needed.
Also, I'm considering putting these tiles around the tank and conveyors where personnel will be working. I used some anti-fatigue mats from lowes, but these tiles will actually be cheaper per sq. ft. as long as they hold up to my testing ok. And we should be able to power wash right over/through the tiles to clean them.

Any thoughts, questions, concerns, ideas, or insults are welcomed.